She senses your moods, is curious about your day, and has purred her way into your heart. Chances are that you chose her because you like Burmese and you expected her to have certain traits that would fit your lifestyle. Burmese cats have a beauty all their own, epitomized by their large, rich golden eyes. One look at a Burmese, and it’s hard to look away. They are simply hypnotizing.  Aside from their attractive look, this lively, affectionate breed makes a great pet for families who enjoy an outgoing, inquisitive pet.

Burmese cats share a very rich and interesting history. This domestic cat breed has its roots in the Thai-Burma border; however, they were developed in Britain and the United States.
In 1930, Dr. Joseph Thompson imported a brown female cat named Wong Mau to the United States from Burma. It was a small, fine-boned cat with a walnut-brown coat fur on the body. When every other person thought this cat to be a Siamese, Dr. Thompson, along with other breeders, believed that it was a different breed.
Dr. Thompson was in Tibet when he first saw this short-haired dark brown cat. He was deeply inspired by the beauty and personality of this cat breed. To study the breed’s characteristics, Dr. took Wong Mau to America.
With the help of a geneticist, Dr. Clyde E. Keeler, Dr. Thompson conducted the study of the breed. Wong Mau was crossed with a seal point Siamese, and as a result, beige, sable brown color, and pointed pattern kittens were developed.
In this process of breeding, Dr. Thompson discovered that Wong Mau was half Siamese and half Burmese, which we call a Tonkinese today. In 1936, Burmese were registered with the Cat Fanciers’ Association (CFA) and gained popularity.
In Britain, the new British breeding program was reviving the interest of the breeders, and by 1952, almost three generations of Burmese cats were produced.
If we look at it today, the actual look of the Burmese cat has changed. Originally, these cats were dark or solid brown in color. Now, these cats can be seen in a variety of colors. In addition, the previous and the current breed have different temperaments and social behaviors.

Burmese cats are amusing, playful, super-intelligent, and an interactive breed. These devoted cats are loyal and people-oriented, which means that if you are looking for affection, they can be the best companions.
Burmese have a childish nature that can be entertaining for people of any age. These cats behave similarly when they are of 16 years of age like they behaved when they were 1. They need your full attention when performing animated antics, and make sure that they won’t go unnoticed.

This amazingly playful and entertaining breed is eye candy that can win any person’s heart. However, their temperament can differ from gender to gender and according to age. For example, female Burmese cats are more sensitive, highly intelligent, curious, and deeply in love with their humans. On the other hand, males are a bit more moderate and cautious. They are only passionate about their favorite food items and when they will be served. Moreover, they are social but tend to be more comfortable around Burmese siblings instead of other animals.

Unlike other cat breeds, especially Siamese cats, Burmese are not very vocal or talkative. They will only interact with you when they want to express something or need your attention. However, their voice is sweet and will not poke you in any way.
As they are the people’s cats, they should not be left alone for a longer period of time as it can be dangerous for their mental health.

Burmese Cats Have Personality Plus

As lovely as Burmese cats are to look at, most owners will tell you it’s the Burmese personality that keeps admirers enthralled. If you’re looking for a cat that will be completely devoted to you without sacrificing its free will, look no further.

Burmese are known for being extremely affectionate. They don’t do well alone and will follow their humans everywhere. They’re the type of cat that will always find its way onto your lap and in your bed. They also are known for enjoying time with children.

These cats seem to feel it’s their duty to keep their human companions entertained. It’s not unheard of for some of these amazing felines to learn to play fetch, and if you’re not in the mood to join in that’s perfectly fine. These cats can amuse themselves and are glad to let you sit back and observe the fun.

Be forewarned though, these cats can also be quite stubborn once they’ve set their minds on something, and you will be hard put to persuade them otherwise. They are also known to be quite vocal and will let you know how they feel at any given time.

It could be considered a plus or a minus, depending on how you look at it, but Burmese are also very dependent on their owners to look after them. If they accidentally escape and become lost, these cats stand a lesser-than-average chance of surviving on their own. Burmese are definitely not the type of cat you turn outdoors for a romp around the neighborhood.

The modern Burmese breed was developed in the United States and Britain under distinct breed standards. Such an unusual breeding program resulted in the development of a number of different features among the two groups, but some cat registries still do not formally recognize them as distinct breeds.

The European Burmese (Europa, UK, Australia, New Zeland) has a long, slender body, long legs, and oval paws. The head is wedge-shaped with a long muzzle and almond-shaped eyes. The tail is usually medium long.

The American Burmese (USA) has a significantly stockier body and its legs are proportionate to the body. The head is much broader, muzzle shorter and flattened and the eyes are round. The ears are wider at the base in comparison to the British variant. The paw shape and tail length are similar in both groups.

Both British and American Burmese cats are small to medium in size, commonly weighing from 4 to 6 kg. They are always very muscular and strong, thus often feeling heavier when held than they actually are. This is where they got their nickname of a “brick wrapped in silk”.

The coat is always short, silky and glossy. Originally, all Burmese cats were rich dark brown (sable in USA, brown in UK and Australia and seal in New Zealand), but today a wide range of colors is allowed.

The American Burmese has big eyes, with roundish form, wide set, slightly surprised.
The European Burmese has big and wide set eyes too, but the top line of the eye is straight, with an easy decline to a nose, with oriental manner, the bottom line of an eye rounded off.

The love and care you provide to your Burmese cats have to do a lot in their overall health and temperament. These unique and beautiful creatures need affection from their families to be more lovable.
Unlike other fancy cat breeds, Burmese cats are not very high maintenance. Taking care of them is not something that people would have to do by going out of the way as they do not require much.
Knowing and providing the basic diet, making sure that they do not have any health problems, and taking care of their grooming is all you need to do to be the Burmese cat’s favorite person.

Burmese is an active cat breed, and to keep up their lifestyle, they require a protein-rich diet. A nutritious diet schedule is essential to meet all the bodily needs of the cat and to ensure its health.

Taking care of your pet’s health is something that should be your first priority and not an option. If you can not ensure their health, getting a Burmese cat will not be a good option for you.

If you want your Burmese cat to be active, fresh, and playful all the time, paying attention to its grooming is equally important as its health. Unlike some other cat breeds, these cats have a short hair coat on their bodies, making it easier for the owners to keep it tidy and groomed.
These cats do not require deep grooming once in a while. Proper rubber brushing once a week is enough for them to get rid of all the dead hair and knots. 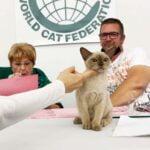 A new litter was born

We use cookies on our website to give you the most relevant experience by remembering your preferences and repeat visits. By clicking “Accept All”, you consent to the use of ALL the cookies. However, you may visit "Cookie Settings" to provide a controlled consent.
Cookie SettingsAccept All
Manage consent

This website uses cookies to improve your experience while you navigate through the website. Out of these, the cookies that are categorized as necessary are stored on your browser as they are essential for the working of basic functionalities of the website. We also use third-party cookies that help us analyze and understand how you use this website. These cookies will be stored in your browser only with your consent. You also have the option to opt-out of these cookies. But opting out of some of these cookies may affect your browsing experience.
Necessary Always Enabled
Necessary cookies are absolutely essential for the website to function properly. These cookies ensure basic functionalities and security features of the website, anonymously.
Functional
Functional cookies help to perform certain functionalities like sharing the content of the website on social media platforms, collect feedbacks, and other third-party features.
Performance
Performance cookies are used to understand and analyze the key performance indexes of the website which helps in delivering a better user experience for the visitors.
Analytics
Analytical cookies are used to understand how visitors interact with the website. These cookies help provide information on metrics the number of visitors, bounce rate, traffic source, etc.
Advertisement
Advertisement cookies are used to provide visitors with relevant ads and marketing campaigns. These cookies track visitors across websites and collect information to provide customized ads.
Others
Other uncategorized cookies are those that are being analyzed and have not been classified into a category as yet.
SAVE & ACCEPT